There are many ways to say it, but the proper Molon Labe pronunciation is as simple as: 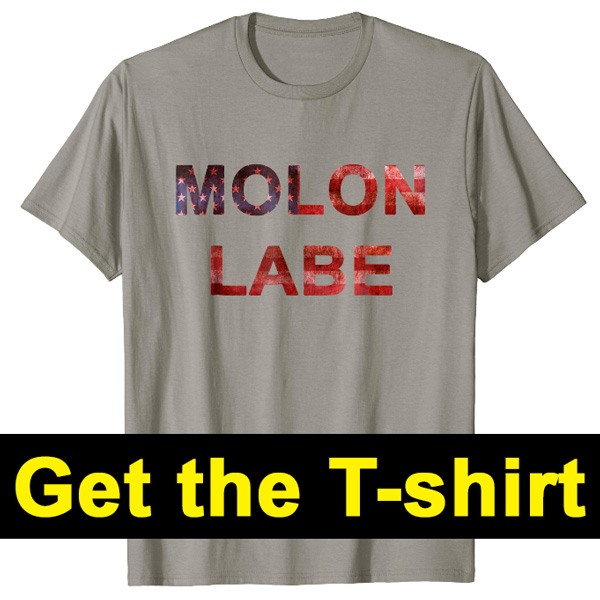 However, here in America, the typical way we say it is: "Mow Lawn Lah Bay". I typically go with this version, as its more recognizable by the firearms community.

Now that we got the easy ways to say it out of the way, let's take a quick look into what this phrase means, and where it came from.

So what does Molon Labe mean? Here is the answer:

"come and take them"

It is also commonly translated as "come and take it", given some American history influences that we will discuss.

The phrase is very popular in America in reference to the 2nd Amendment, which is the right to bear arms in the US Constitution.

Molon Labe is a phrase proclaimed in defiance to tyranny, and speaks to the inalienable rights of humans to protect their life and liberty.

As we will see in our history lesson next, we'll find out who said it to who and why. Let's go way back in time, to ancient Greece.

The phrase has its origins back to the days of the Greek city states in 480 BC. Persia was in the process of invading Greece, and Sparta took up the challenge to confront them.

However, given circumstances at the time, Sparta did not have the numbers in their favor. Therefore, they chose a strategic location to fight.

It was at a small pass that could be defended by a smaller force by limiting the Persian army to constricted fighting spaces. 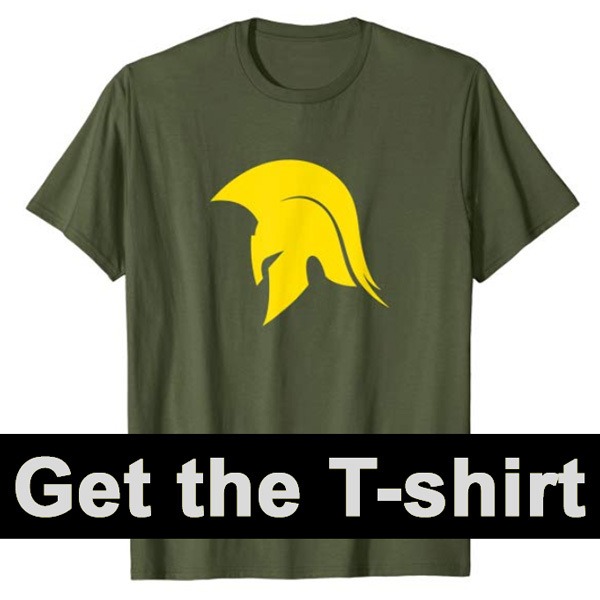 It was here at the beginning of the Battle of Thermopylae that King Leonidas of Sparta and his men were greatly outnumbered by the Persian army.

They had no chance of winning, yet they stayed to fight.

With the Spartans facing certain death, Xerxes of Persia demanded that Leonidas and his men lay down their arms and surrender.​

​King Leonidas responded to Xerxes in defiance: Molon Labe ("come and take them").

The Spartans fought valiantly for 3 days, holding the Persians at bay while the rest of Greece was able to evacuate to strategic locations. ​

​This allowed the Greeks the chance to marshal a counter attack at a later date.

It was those 3 days where few stood against the many, protecting their families and their fellow country men, which ultimately led to defeating the Persian invasion.​

The movie 300 is a modern day glamorization of this historical event. If you haven't seen it yet, you should.

​​In the movie, the fighting is more artistic than reality, but the sentiment of the movie is very inspiring. And Hollywood messed up the translation by saying "come and get them" instead of "take", but nothing is perfect.

In American history, the phrase was again used by a group of Texan settlers in a skirmish against Mexican soldiers.

Mexico had loaned a single cannon to Texas settlers to help them fight off indian attackers.​

Afterwards, the Mexican leadership had second thoughts on giving the settlers that type of capability and decided they wanted the cannon back.

So Mexico sent soldiers to take the cannon from the settlers by force. The settlers in defiance fought to keep it, and above their fortification they flew the infamous flag seen below.​ 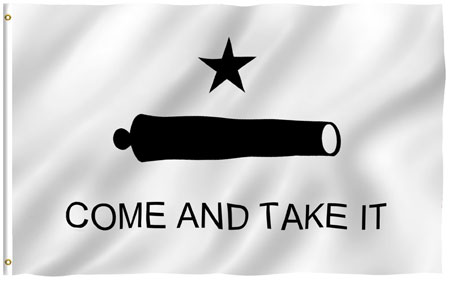 This is known as the Gonzales​ flag, and is much more commonly seen in the firearms community. The flag is the recognizable lone star, cannon, and phrase "come and take it".

This is what the actual Greek looks like for the phrase Molon Labe. Since we don't often use Greek symbols outside of science, this version is not seen as often.

You will typically find this in more formal declarations of the phrase. Perhaps in Europe and Greece this one would be more appropriate.

Here in the USA, it is also written as: ΜΟΛΩΝ ΛΑΒΕ 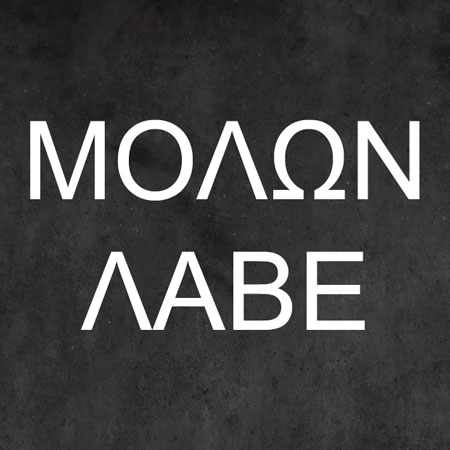 This one is seen much more often in different places. It is the English looking version of the famous Greek version that is inscribed on the Leonidas Monument at Thermopylae​.

As you can see, the easiest way to represent these Greek symbols is with the closest English letters.

Here we have a slightly shorter version of the longer one that we just discussed. This one drops the extra "o" in the first word.

This is similar to the original version. However, the "b" has been replaced with a "v" to put focus on the proper pronunciation of the phrase.​

And yet another version of it with a slightly different spelling.​

​Are you a big fan of the phrase? I know I am. That is why we are going to look at the best gear out there that you can get to show your support.​

I have found that this type of gear is very popular in the firearms community. It is also a great conversation starter if you are out in the general population.

Many people might be fearful at first, but with mature conversations about the topic, usually most people see the merit in the phrase.​​

There are many great shirts out there to choose from. In today's world, the phrase is most commonly mixed with an AR so that it's relevant to modern arms.

There is still a very thick influence from the Spartan origins, so you will often see a Spartan helmet mixed in.​ 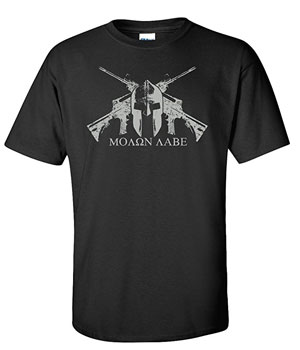 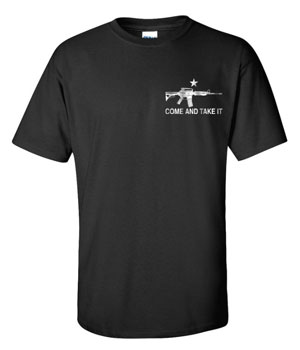 Flags are great to fly to show your support. I also remember when I was younger I used to always hang flags like these on my wall for remembrance and decoration.​

If you have the budget, it can be really cool to frame a flag like this for wall hanging as well.​

Out of all of the different flags out there, we selected the two most popular ones.​ 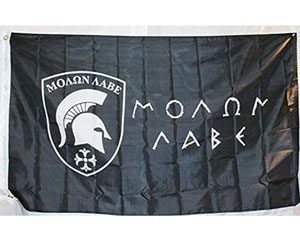 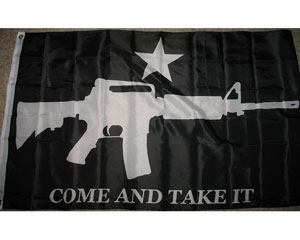 Let's not forget dressing up our stuff with some awesome stickers. Heck, we can even throw up a Molon Labe decal on our vehicle to help spread the word.

Here are our two favorite options: 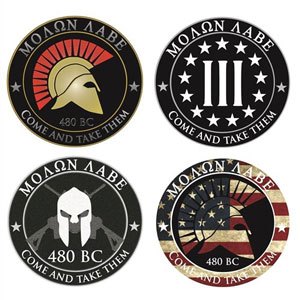 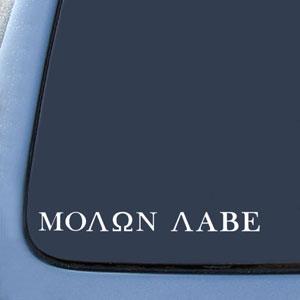 Now we know how to properly pronounce the phrase. The meaning of the phrase is very symbolic and inspiring.

Come and take it (or them) is our go to phrase for asserting our right to bare arms and protect us and ours.

We also looked at a brief history as either a refresher, or so that we now know the origins of it.

Next, we looked at the many different versions so that we can easily recognize the phrase anywhere.

Finally, we looked at some really awesome gear that we can get to help bring awareness to the phrase and get people talking.​

​It's important that we never let our rights be eroded away, and we can do this with proper education and conversations about what is important in our society.

Let's remember to respect each other and any and all opinions on the topic. Freedom of speech is our 1st amendment, while the right to bare arms is our 2nd.​

If you are interested in learning more about AR's, check out our guide on how to build your own AR-15.​

I served 10 years with the South Vietnamese Army came here in 1975 join the U.S.Army Scout for 7 years… I sure missed it a lot. turn 60 something and sure miss all of my brothers in arms. SALUTE.

Thank You Man…I was 15 in 1975 so I was old enough to know what was going on. All my life has been thinking something bad was gonna happen here in the USA, but whenever I heard that our troops had boots on the ground, I knew I was Safe. I’m glad you made it back with one of the coolest armies ever and I don’t care what people say, you guys had some of THE best coping music ever written or played. They have NO idea what went on over there or how many terrible things you had to do or be killed….war..it sucks. PEACE..✌??

Thank you for coming home again and what you did for me.I was born in 1962 just a kid.

@Steve Stevenson That’s not correct, pronunciation doesn’t change. Greek is a mathematic language, has structure and strict rules. Modern Greek is a continuation of the Ancient Greek. We still use almost the same alphabet. Even If you don’t know a word you can pronounce it correctly.

BUT WE GET THE POINT OF THE GREEK PHRASE: “People sleep peacefully in their beds at night because rough men stand ready to do violence on their behalf” — the lawful, brave conduct of soldiers and cops.

One correction: I don’t think you meant to use the word infamous when describing the Gonzales flag. Here’s the definition of infamous:

I’d call it famous–not infamous, although I’m sure Santa Anna might disagree were he still living. Cheers!